Hungary as a member of the European Union (EU), has formed a favourable institutional framework, which is an essential incentive for domestic and especially for foreign investors, who have contributed to the economy more than 92 billion dollars in direct foreign investment since 1989. The 77% of all, comes from the EU, while Germany holds the lion’s share at the rate of 24%.
The Hungarian State encourages investment in both the production of goods and in high value-added sectors, such as research and development centers, manufacturing facilities and service centers. It is a general belief that there are also significant opportunities in the fields of biotechnology, information and communications technology, software development, agriculture and tourism.
Hungary has a well-established system of incentives for investors, with a special package of incentives for investments of over EUR 5 million as a cornerstone. The incentives focus on investments for the establishment of production facilities, R&D, logistics, production of green energy service provision centers, investment in the tourist industry etc.
The stimulus package includes capital grants, tax breaks, and subsidies for job creation and training. The incentive system is compatible with EU regulations on competition and State aid to be granted by the Hungarian Investment Promotion Agency (HIPA). Finally, Hungary actively embraces Research & & Development Innovation (R&D). The plan is to double its support to R&D investment, offering subsidies of more than 2.2 billion in the period 2014 and 2020.

Although the General VAT rate is 27%, there are reduced rates of around 5% on magazines, books, drugs, central heating, while from 2017 extends this reduction in poultry, eggs and fresh milk. At the same time, at the rate of 18% VAT are included all of the internet services while completely exempted from VAT are banking and insurance services, services related to investment, as well as the sale or rental of real estate. The enterprise income tax rate is one of 9%, the lowest in the European Union. The minimum wage has been established at the level of (weight average) 412 mixed earnings, while employer contributions correspond to 22%.

Main reasons to invest in Hungary

The subsidy for large investment projects is subject to customized regional aid thresholds, based on the following scale: 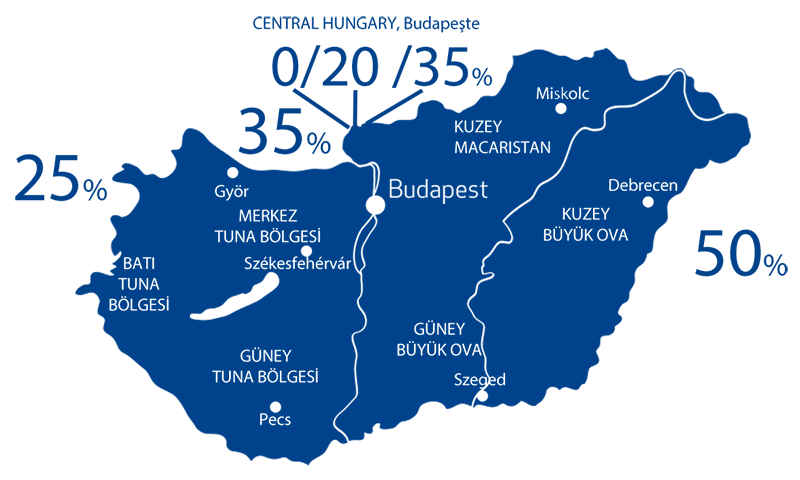 Co-financed deals with the EU.

The seven-year European Union fiscal period between 2014 and 2020, Hungary is entitled to approximately 40 billion euros of financial subsidies. Generally, it may be said that this time will be characterized by the following:

•   60% of the subsidies granted by the European Union will be spent for economic development (instead of 20% allocated in the previous period)
•   Support of small and medium-sized enterprises, research and development and developing the agricultural sector will be more intense